Show Don’t Tell Rule: Is It a Necessity? 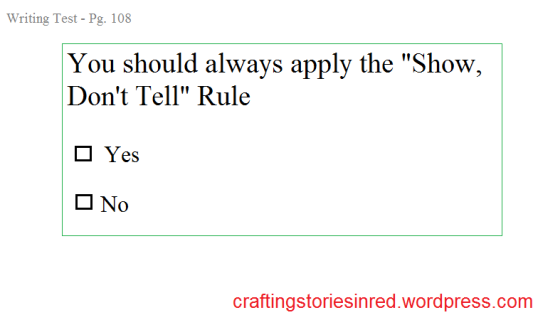 The words are repeated so often in writing circles that they’ve almost become a cliché. Writing blogs, writing groups, writing books all use it so frequently that writers get sick of it.

And so, you might ask, why am I writing about it?

Sometimes it’s good to run beside the bandwagon.  Not get on it, mind you, but move beside it and tell people what they’re really getting into. I shan’t repeat the phrase over and over to you, making a theme all throughout my posts, but for this one time, I would appreciate it if you wouldn’t stone me for speaking of the Show Don’t Tell rule. I won’t mention it again. Really.

I have heard of some published authors who say the Show Don’t Tell rule is the biggest nonsense rule when it comes to writing. Others say it’s the most important. To be quite blunt—actually, let’s call it direct. Direct sounds much nicer than blunt. To be quite direct, both groups are wrong.

Certainly, this rule can’t be the most important part of the story, since that title goes uncontested to characters (have you ever seen someone fangirl over an excellent plot? A fantastic writing style? These are certainly important, but the readers love the characters the most). Nor can it be the worst advice given, because that goes to any number of things starting with the word never.

Showing and telling are tools; no more, no less, and both should be used in their proper places. There is a time and place for both, without people squabbling over which is correct, when, and where. Folks, your tools should work together and compliment each other, filling in spaces  where they can and leaving the spaces they can’t to the others. There’s no need to leave one and overuse the other.

For example, “Neil slumped against the cabinet, dropping his head into his hands,” does not need to be changed to: “Neil’s knees bent yet he remained on his feet, and his shoulders released their tension, turning into what resembled an upside-down U. His back rested against the edge of the pale blue cabinet, and his neck bent, lowering his head until it reached his raised hands.”

To extend this into the second example is, as they say, overkill. It’s useful when you’re working toward a specific word-count goal, but that’s the only purpose it serves. Slumping is, well, slumping. When he slumps against the cabinet rather than onto the cabinet, we know he’s still on his feet. Since he’s dropping his head into his hands and slumping, we can assume that his shoulders aren’t as straight as they might normally be, and when we’re told he drops his head into his hands, we can guess that his neck is bending. Neil could be putting his head into his hands without his neck bending, but that usually would be something more of a face-palm, but he certainly wouldn’t be dropping his head then, now would he? As to the cabinet, we all like blue, but in this case the color is irrelevant. In this case, we want to know that Neil is acting dejected.

There are times that simply stating things won’t do, though. Feelings, in particular, are the things that people cry the rule at most of the time. We, as readers, want to know what your character is feeling, and it’s your job to help us.

Since most of you have probably seen anger used as an example several times, I’ll use something else.

“Niel felt lonely,” simply isn’t enough. Perhaps we can try, “Niel took a deep breath, letting it out slowly. His stomach twisted and churned until finally settling into a dull ache, the emptiness he had first felt upon leaving home spreading until it took the form of numbness that spread to his fingertips. He would give anything in the world to go home, even for just a minute.”

I’m sure that this isn’t the best example that I could come up with, but nothing else comes to mind, and I’m sure you get the general idea. We want to be able to feel the emotion of the characters. Tell us things in a way we’ll not only register, but understand.

In summary, Give us what we need to know and then stop telling us things. It’s nice that the cabinet is blue, the carpet is stained, or the car is a green SUV, but tell us why we should care why the cabinet is blue. Tell us not only that it’s blue, but that it used to be bright but has faded, the center almost a pale off-white now from being used so frequently, then tell us why that matters. Tell us who cooks there — or who used to cook there. Tell us that the carpet is stained because of the children who ran through it in muddy boots, or because of the murder committed in that room eighteen years ago. I’ve seen people who go overboard with descriptions, trying to show and not tell, but you don’t have to show with descriptions. Give us enough information for us to get our bearings: about the wall the character is leaning on and let us know more about the character by the things they’ll notice.

Give us the information we need to fit the mood you’re going for.

Whether it’s that the sky is dark grey, the antique tea kettle came from the girl’s grandmother, or that Neil has got happiness practically spilling all over his face, tell us what we need to know to fit the mood and don’t go any farther. Give us impressions and facts and personality of characters, but don’t overdo either and don’t ever try and use all overly descriptive words or all direct statements.

Show us emotions in the way you describe, or tell us about the apple tree your hero is about to fall out of. When people are feeling things, give their feelings to us. When people are seeing things, give us the things they’d notice. That said, don’t ever feel like there’s only one formula. Everyone disagrees about the Show Don’t Tell Rule. Set your own style and tell us the things you think we ought to know, but definitely avoid giving us less than we would like to see, and avoid overloading us with information we don’t need.

What do you think of the Show Don’t Tell rule? What have you learned about it, and what are you learning? You know the game – Comment!

And, as a slightly random side note, I’m interested in this Neil fellow now. Who do you think he is, reader?

3 thoughts on “Show Don’t Tell Rule: Is It a Necessity?”

I love hearing your comments. Please add to the discussion! (It'd be awesome if you could keep the comments G Rated. Thanks. :p) Cancel reply