Origin: “Stepping Through,” by BPKelsey. Note that I do not know this artist, nor this artist’s other work. If you do look the artist up, look out for nasty beasts that you may find out there.

If you’re feeling inspired, write something about this picture! I would absolutely love to see whatever you come up with (though keep in mind that my nine year old sister reads this blog, so keep it clean!). You can put it here in the comments, or post it on your own blog and leave a link in the comments. I can’t wait to see what you talented writers come up with!

The gasps and murmuring grew. Though some were hardly more than whispers, clear words reached Jace’s ears–dangerous, monster, animal, soulless. He tried to back away from their accusing eyes, but the collar pulled hard against his throat and held him in place.

For all his years as a slave, Jace has known nothing but the hatred people hold for his mixed blood–one half human, the other half the blood of a race considered monsters. Always, he is the outsider and quickly learns it is better to keep to himself. Yet, when his volatile ryrik blood leads him to do the unthinkable, he is thrown into a world of violence and bloodshed.

Forced to become a gladiator, Jace finds more and more of his heart dying as his master works to break down his will not to become the monster everyone believes he is. When a stranger interferes with his master’s harsh punishment, Jace’s world is upended yet again. But with it comes the possibility of hope that has long since died. Could the man possibly hold the key to escaping the hopeless darkness that is Jace’s life? Is there such a thing as life beyond the cruelty of slavery?

Ilyon Chronicles is a six book, non-magical Christian fantasy series geared toward new adults (ages 18-25+). Half-Blood is best read after the first book as backstory for the series’ main character.

I’m not even sure I’ve got a way to start explaining how this book affected me, so I suppose I’ll do it with a quote:

Most of this story is that of pain, of suffering, of what happens when humans believe anything is lower than they are. For a bit of background: when I say I cried at a book, I don’t mean literally. Oh, sure, there’s a tear or two, but they never make it more than a centimeter past my eye. The same was not true for this book.

During that last half of it, I could not keep my face dry for more than ten minutes. I could not stop crying, though it blurred the words in front of me. I read until the book ended at around 12:40 at night—and then, after I had put it away, I simply lay on my bed and cried some more. It would be misleading to say that I exactly loved it, and I could not recommend it to everyone. At the same time, the book was fantastic.

It was hard. So very hard, to see the life that Jace went through. All he remembers is slavery, and through most of this book, this is all that he knows.

The characters were well done. Jace, the various other slaves he meets, the various masters who he served, the different people he met throughout the first seventeen years of his life. I was pleased to see that the characters overlapping through books stayed consistent.

The various characters evoked different emotions in me. Some were evil; some were moderately acceptable. Some I hated… some I just plain couldn’t find it in me to hate. There were so many characters who I pitied in this novel, even the ones who, on first glance, would at first just be cruel and worthy of your hate.

I would have liked to see a little more kindness in Jace’s life… It felt a tiny bit awkward to have no kindness and then extreme kindness. Perhaps some middle ground would have been appreciated.

The character development here was, in keeping with my Southern-ness, “Somethin’ else.” Jace stayed the same person all throughout the novel, but he went through changes as life, cruel as ever, shook him and battered him.

The setting remained consistent with the other books all the way through, though we got to see a… well, a different side. From the manor house to the gladiator fights, then all the way to a little farm where the book ends, the settings are various, not all unfriendly, but few welcoming. Yet even though the other books take place in different locations, the world is bound together so well that there is no doubt that they’re the same place.

The writing was smooth and even. One author once described your words as a window. With that in mind, Jaye’s window was clear, smear-free, and spotless. I noticed only one sentence in the book—the rest of the time, my gaze was firmly on the characters.

The research…ah, now we get to the exciting part. In the past, Jaye had heavily researched gladiators for the previous books in the novel. I could tell by the easy way she incorporated facts into her story that she knew the material well. I didn’t feel uninformed at any point, nor was there any info-dumping or bits of information that seemed unimportant. Though, I feel as though I must mention one sentence; indeed, the only sentence that I noticed while reading.

Strengthened by this determination, Jace spun the sword around and drove the hilt into the side of the gladiator’s head—not hard enough to be lethal, but enough to knock him momentarily senseless.

This is not necessarily a problem, especially since the story is set in a medieval-type era. However, as you may remember from this post, a blow to the head can frequently be (if not severely damaging for the rest of a man’s life) immediately deadly. However, Jace may not know this, so I will accept it as part of the story.

In a way, I loved this book for the honesty of it. It gave us a good idea of what was going on before we first met Jace in Resistance. On the other hand, if this had been the first book of the series that I read, I may not have made it all the way through the novella. It’s hard, it’s dark, it’s almost depressing. If you know you can’t handle that, I cannot recommend it for you.

And yet I can recommend it for you if you’ve read Resistance and The King’s Scrolls, because you know that things will get better. Things get better even at the end of Half-Blood, but I still don’t think the story would be beneficial unless you’ve read at least Resistance first.

First, about the author: 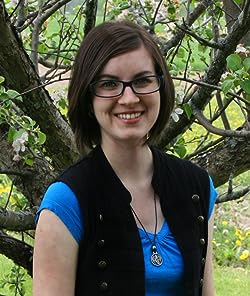 Jaye L. Knight is an award-winning author, homeschool graduate, and shameless tea addict with a passion for
Christian fantasy. Armed with an active imagination and love for adventure, Jaye weaves stories of truth, faith, and courage with the message that, even in the deepest darkness, God’s love shines as a light to offer hope. She has been penning stories since the age of eight and resides in the Northwoods of Wisconsin.

Jaye: I’m not sure what the very first book was, but my all-time favorite books when I was young were the Pony Pal books by Jeanne Betancourt. I adored those books, and the first story I ever finished writing was based off one of them.

Jaye: My mom has been the biggest influence in my writing. I don’t think I ever would have started if not for her, since she’s a writer too. Then, of course, there is J.R.R. Tolkien. It’s because of him that I started writing fantasy. As far as events, I guess a lot of the trials I’ve faced over the last few years have really influenced me, especially in writing Ilyon Chronicles.

Jaye: I can usually write anywhere, unless there’s a lot of commotion. I write most often in the living room or outside in the summertime. Writing outside is my favorite. For editing, I’m usually on my computer in my bedroom. I either like it quiet, or with some epic background music. And I almost always have a candle lit. 🙂

Enter to win a themed giveaway pack! Prizes include an autographed copy of Half-Blood, a blue feather bookmark hand crafted by Jaye, a bronze sword pendant, and a $5 Amazon gift card! (Giveaway is open to US residents only. Cannot be shipped internationally.)

Since WordPress isn’t friendly to Rafflecopter Giveaways, you can just click the picture above and it will take you to Jaye’s blog post. There, you can enter the giveaway, and find a list of other participating blogs!

See the Ilyon Chronicles on Amazon!